Ok, so we all know that most celebrity photos are touched up, but come on, this takes the biscuit (wafer-thin water biscuit, I might add. God forbid some are allowed to eat a butter shortcake).

Faith Hill has left the building.

In her place is Faithazoid v1.0, complete with mannequin-thin arms, non-existent wrinkles and a perfect neckline and shoulder blades.

Oh, and the real Faith Hill didn’t have a right arm, but ‘Zoid does. ‘Zoid’s arms are also the same girth from shoulder to wrist.

Over-sized head. On a skinny body. Not a good look. No matter what the Photoshop demigods might say.

So much for that tagline under the mag: ‘Love your life’. 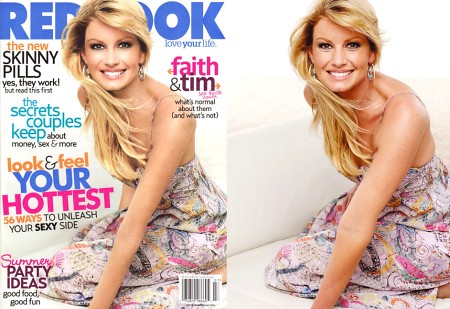 Ok, so admittedly, Winslet has lost some ‘for-Hollywood’ weight over the years, but not THAT much.

“I can tell you they’ve reduced the size of my legs by about a third”, she said. It turns out that, apparently, she’d seen the original photos (pre touch-up) and had liked how her legs looked there, but hadn’t been consulted when the digital changes took place.

I think she should have sued GQ to the tune of “a third” of all copies of the magazine sold for that particular issue. 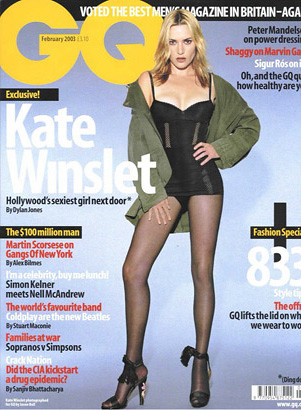 Yes, male celebrities aren’t immune to the digital Frankensteinism going on with some mags. Even sports people can’t escape their clutches. Roddick’s biceps got more than a buffing up in Men’s Fitness magazine.

Maybe the mag was missing Popeye and tried to recreate him.

And, ahem, it’s absolutely no coincidence that there’s the title ‘How to Build Big Arms in 5 Easy Moves’ right next to Andy’s pic.

The thought never crossed their minds. Uh-uh. Not in the least. 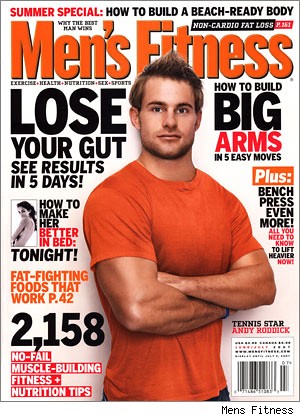 So Jen-Jen’s minding her own business, doing whatever celebrities called Jennifer Aniston do, which this time round was her making her way to an auction. In her hand is the auction catalogue.

But uh-uh, this scenario isn’t juicy enough for Star magazine. So they make one up. According to them, Jennifer’s on her way to see her book publisher to hand in a draft copy of her tell-all book about her life with Brad Pitt. Ta da!

But wait – what about the auction catalogue?

Oh that’s easy, Star thinks. Nothing a little bit of Photoshop can’t handle in its sleep. They simply airbrush the image in front of the catalogue away to make it look like a book manuscript and hey presto, Lisa Minelli’s your uncle. 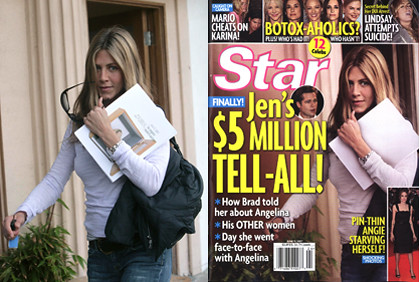 At the time, Katie was about to become the new news anchor for America’s CBS evening news. Someone decided that she looked a bit too big-boned for the cover of CBS’s ‘Watch!’ magazine and decided to give her the Weight-Watchers treatment.

So, a little snip here and little snip there and voila, Katie became a shadow of her former self.

“I liked the first picture better because there’s more of me to love.” 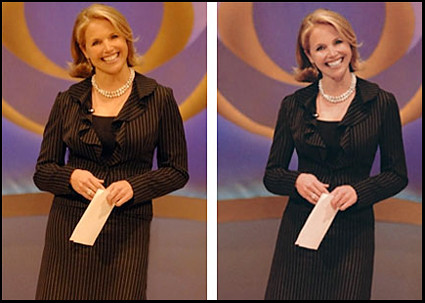 For the most recent Harry Potter release, Emily Watson’s chest was altered in one of the promotional posters, while it was left unaltered in another.

There is some speculation on several blogs as to which came first – whether her chest was flattened from the original or whether it was enlarged, but that’s really beside the point. It’s bad enough that a need is felt to physically alter pictures of women (and men – but it’s mostly women) – sometimes drastically. But to use the same formula on younger individuals is very worrying.

What is up with people? Keira is a good-looking young woman and a great actress who I admit needs a bit more meat on her bones, but this is NOT the way to do it, guys.

If they didn’t like how she looked in the outfit, an idea might have been to alter the costume or something, not her.

In more recent times, she’s taken more of a stand and is plain refusing to have her breasts digitally altered in the future. 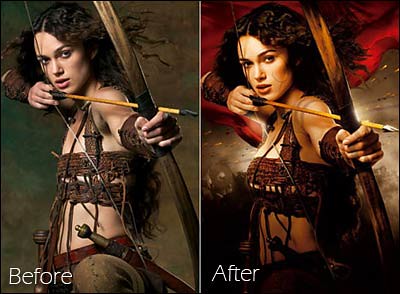 Oooh, it must be all that rowing, innit?

The original version of the photo (warts and all) was shown in most mags, but the Parisian mag, Match, seemed to have a problem with it and gave the French president a bit of in-house liposuction.

Actually, the French president didn’t look that bad in the first place, but in the retouched version, notice his love handle’s gone AWOL and his side looks unnaturally straight? 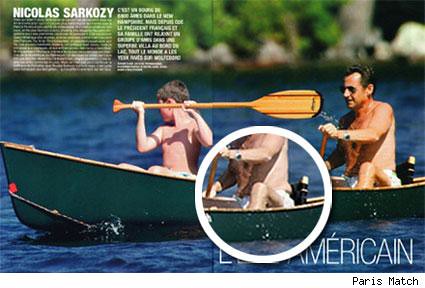